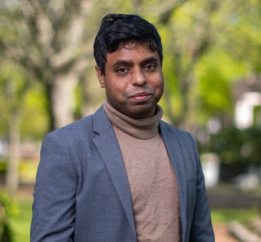 As a writer, he has written for publications like The New York Times, The New York Times Magazine, The Washington Post, The Nation, The Atlantic, The Boston Globe, The Guardian, Teen Vogue, Slate, NBC News THINK, The American Prospect, Gawker, Atmos, In These Times, Quartz, The Appeal, Maclean’s, The Globe and Mail, VICE, ThinkProgress, CANADALAND and Jacobin among others. He was a contributing opinion writer for Business Insider in 2021. He is a blogger for Psychology Today, writing a blog about the overdose crisis titled “Fighting a Crisis”. In September 2021, he wrote a guest column for The Nation as part of their Mic Drop series. In 2017, he was named the inaugural J-Source/CWA Canada Reporting Fellow and worked on a six article series about labour issues in media workplaces. From 2016-2018, he worked with the World Health Organization, UN Environment and Coalition for Clean Air and Climate on the BreatheLife Campaign — a campaign that aims to get cities around the world to improve their air quality to safe levels.

He has appeared on or been quoted in ABC News, CBC News, CBC Radio, The World on Public Radio International, WWNO: New Orleans Public Radio, The Christian Science Monitor, Jezebel, Futuro Media’s In The Thick, The Brian Lehrer Show on WNYC, The New York Times, Global News Toronto, among other outlets.

He has a B.Sc in Cell and Molecular Biology from the University of Toronto and a Masters of Public Health from Brown University.

He can be reached at abd2323[at]gmail[dot]com. For inquiries related to the PPHC; please email abdullah_shihipar[at]brown[dot]edu.

note: DO NOT SEND ME YOUR PR PITCHES I CAN DO NOTHING FOR YOU.

I apologize if you see ads at the bottom of this page.